Wiring is something often overlooked, but forms the foundation of any network. There are many different types of cables of all sorts of scenarios. Knowing which one to use can be confusing, but we know all the different options, ups and downs of every cable type. We also understand the importance of testing and labeling each line. Without testing its very hard to tell if the cable was installed properly other than it partially functions or not. A high-end testing tool can tell you everything from what type of cable is being used to the pin out and the throughput. Without labeling performing any kind of work in the future is next to impossible as you will have to track down where each line goes.

Unshielded Twisted Pair (UTP):
Is the most commonly used type of copper cables that utilizes twists in the pairs to eliminate electromagnetic interference and crosstalk. This is the signal on one wire jumping to another causing interference. Since there is less shielding the cables are cheaper but work fine in most environments. 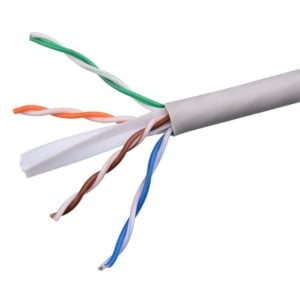 Shielded Twisted Pair (STP):
Copper cables utilizing shielding and twists to eliminate electromagnetic interference and crosstalk. These cables are best suited for locations with high electromagnetic interference such as heavy industrial environments. These cables cost more, but have a much higher performance rating of +10 gigabit and work in scenarios their unshielded cousins UTP just won’t. 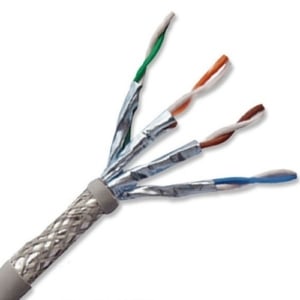 Fiber optic cables offer the speeds and distances that no other cables are capable of. Based on a laser or LED light shot down a cable with glass cladding that reflects that light down the cable. Versus all other cables that rely on electricity passing through the cable to provide data signaling. The down side to using electricity is interference which worsens with distance. Fiber optics do not suffer from interference which is what allows them to reach the extreme distances over 100km they are capable of. Fiber optics also have a place in high electromagnetic (EM) interference environments that electrically based cables cannot operate in.

Another benefit of fiber optics is Dense Wavelength-Division Multiplexing or DWDM which allows multiple wave lengths of light to traverse the same strand of fiber. With each wave length capable of doubling the speed of that connection. Allowing a single capable of almost limitless scalability with bandwidth capacities of over 1tbps. To put that in easily equitable terms most PCs use a 1gbps connection which 1000 of could traverse at full speed all at the same time of a single 1tbps DWDM multi wave fiber optic line. These lines are used to connect multiple data centers, cities and continents together via undersea cables.

Most fiber optic cables also utilize multiple strands. Each strand is only a few MM in diameter and can be bundled together in cables containing near 900 strands. With each strand capable of multiple waves gives a combined bandwidth of 1pbps which is 1000tbps or 1 million gbps. Meaning a million 1gbps PCs all at full speed could traverse these multi strand, multi wave cables all at the same time. Allowing the internet as we know it to have millions of people streaming videos, transferring files and surfing the web without bogging down. The downsides to fiber optics are the cost of the cables, transceivers and devices that run them. Lastly, they use significantly more power and are far more complicated to install.

Fiber optic cables come in a couple types of connectors FC and ST which is a locking style of FC both of which are BNC style connectors and are being phased out. SC which is a push-pull connector which are quick to install and LC also push-pull but half the size which allows for much higher density and the most commonly used. For the highest density you have MTP/MPO trunk cables that allow you to take 288 strands and plug them in using a single connector. Saving extreme amounts of space where in a data center that space is at a premium. Using trunk cables in a single 1u patch panel can handle the same number of connections as entire 42u 2 post rack. Meaning a single rack of MTP/MPO connectors can accomplish what would take 42x 2 post 42u racks of LC connectors. 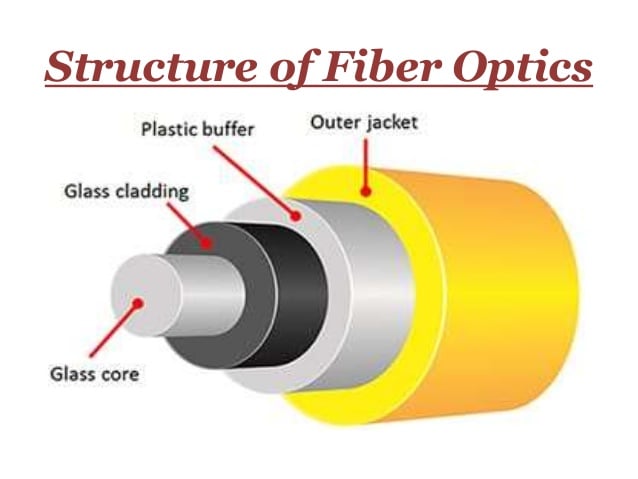 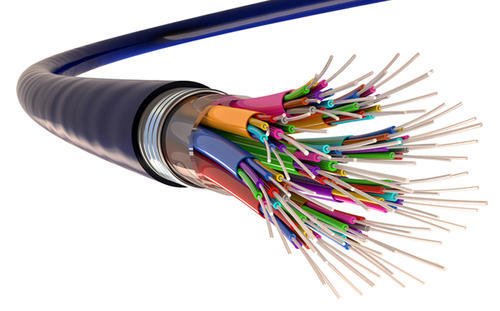 Cable Management:
Cable management can be crucial especially in large networks. Being able to diagnose, find and replace cables can be a daunting task in some networks. A network with proper cable management promotes, labeling, better air flow, cable trays, velcro / zip-ties, easier management, and maintenance. Not to mention it  looks better and more professional. 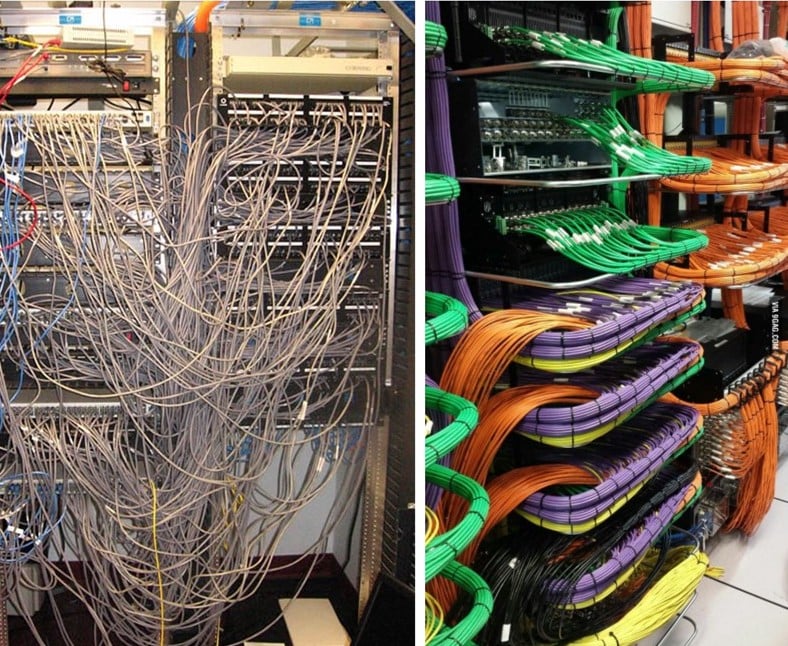 Transceivers
Most commonly referred to as the small form-factor pluggable (SFP) which is a compact, hot-pluggable network interface module, that allows for a single switch, router or network interface card to support several different cable types depending on the application. As stated above there are lots of cable types each having their own unique properties. By using transceivers each port can use the cable type that best suits the requirements of its use. Making the devices much more agile and able to adapt to all the scenarios so that you don’t need a new device every time your cable requirements change. Which will save money and increase the lifetime of the device. Most device manufactures including Cisco, Juniper and Brocade offer their own transceivers that a very expensive but covered by their support warranty. However, other manufacturers make generic models that are essentially the same except much cheaper, but that won’t be supported by the device warranty. Keep in mind you need a transceiver for each port on either end of the cable, so this can add up quickly to the overall cost of the equipment but they’re only needed for the ports in use. They also help increase the lifetime of the device because when one fails the transceiver can just be replaced instead of the entire device. Transceiver types GBIC, SFP, XFP, SFP28, SFP+, QSFP+, QSFP28, QSFP56 & BiDi. 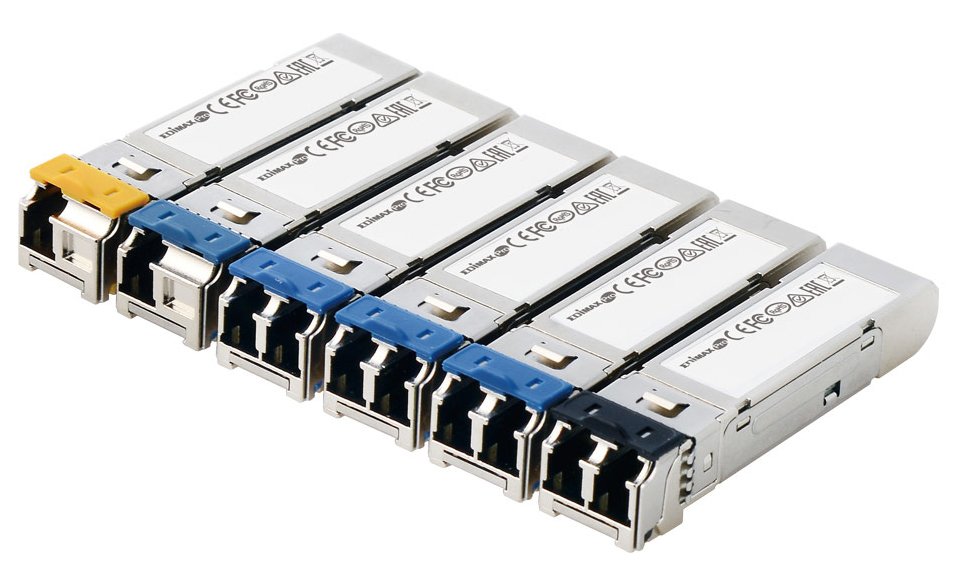 Patch Panels:
A patch panel is used to go from riser cable with a solid core to a patch cable that has a stranded core. With the other end going to the keystone jack and the patch cable plugging in to a switch. It is also used to label and organize all the wires. This needs to be placed in an equipment rack or mounted to the wall, so it doesn’t move. Each wire needs be connected to the patch panel using a punch down tool. This needs to be done correctly maintaining the twists in the cable or you risk near end crosstalk which will create errors and adversely affect the performance. 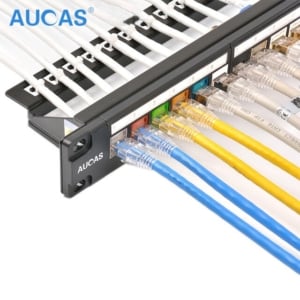 Keystone Jacks:
This is a standardized form of jack and face plate combination so you can have a single face plate that through a modular design allows several types wires hook up to it.

PVC vs Plenum Cables:
There are two choices of material that wraps around the wires PVC and Plenum. PVC is cheaper but releases noxious gases when burned. Whereas plenum does not release any gases and is rated for open air pathways. Plenum can be mandated by the building code depending on where you are located, but is far more expensive that PVC. 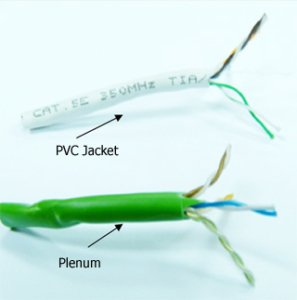 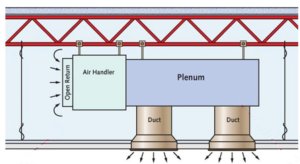 A rack is really a necessity when dealing with even a small number of servers and networking gear. The rack gives something to mount all the equipment to preventing it from getting knocked over or moved in any way. The rack can also be mounted to the floor or the wall so that it can’t be moved either. A rack can come fully enclosed with a locking mechanism to keep out unauthorized users from touching and in some cases even seeing the equipment. This is especially prevalent at data centers because this is how space is sold and separation of one client from another. 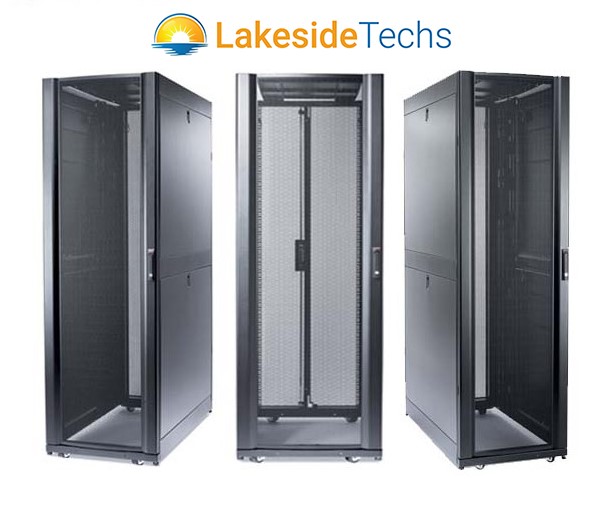 Rack Units (U):
This is a standardized form of measurement used on equipment racks that equals 1.75 inches. When purchasing a rack or any rack mountable equipment the size of the device will be measured in “U”s. A full rack is between 42u-48u and a half rack is 22u-24u. 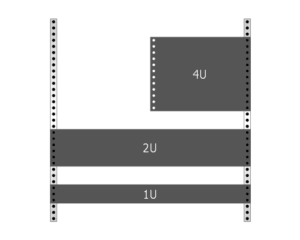 110v/120v VS 220v/240v AC VS 48v DC Power Feeds:
All business grade IT equipment will run at 110/120 volt AC and 220/240 volt AC. When possible we want to run a higher voltage such as 220 or 240 volt AC. The reason being it is more efficient so 20 amps of 220 volt AC is the same as 40 amps of 110 volt AC. The higher voltage is also more efficient so you will use less overall power at the higher voltage. Finally, there is 48 volt DC which is by far the most efficient and will use least amount of overall power. The reason being there’s no ac to dc conversion since all electronic equipment runs on DC or direct current there’s no loss associated with the conversion. The downside is most data centers don’t offer this and all of your networking gear has to have 48 volt DC power supplies. These power supplies are cheaper since there’s no conversion happening however since less are made, they are harder to find and sometimes more expensive just due to the fewer numbers manufactured.

Power Distribution Units (PDUs):
A power distribution unit is a device fitted with multiple outputs designed to distribute electric power, especially to racks of computers and networking equipment located within a data center. Data centers face challenges in power protection and management solutions. Advanced forms of PDUs referred to a switched PDUs will let you log in to them remotely that displays the power usage of every port including the totals and allows you to power cycle individual ports turning the power off and on. APC makes a zero U PDU that mounts to slots in the back of the rack so as not to take up any valuable equipment space. Allowing for more servers, switches, routers and other money making equipment. They come in 110/120 volt AC and 220/240 volt AC models with a variety of outlet types. 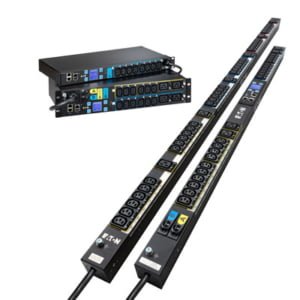 Uninterruptible Power Supplies (UPS):
Provides power to equipment in the event of an outage utilizing an array of batteries. Also provides power conditioning which protects against over and under voltage power events. Each UPS is rated for a certain amount of wattage that determines the load the UPS can handle and how long the batteries can sustain said load. Most UPSs at maximum load will only last for 15 minutes on battery power. You can increase this time by purchasing battery extenders or a larger UPSs with a higher wattage rating. Manufactured in 110/120 volt AC and 220/240 volt AC models. With step down transformers for going from 220/240 volt AC down to 110/120 volt AC for equipment that can’t run at 220/240v. 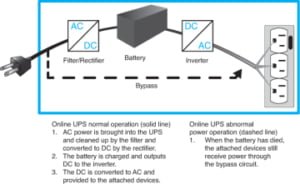 Automatic Transfer Switches (ATS):
Automatically switches between two or more power feeds such as a generator, backup batteries or a second utility circuit / grid keeping equipment powered on in the event of an outage, failure of equipment, or a circuit. Made in all shapes and sizes ranging from 110 volts to 1000s of volts and 20 amps to 1000s of amps. 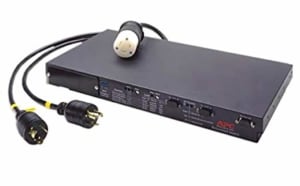